Henry Martin
Henry Martin spends his nights writing fiction and poetry, which predominately deals with the often-overlooked aspects of humanity. He is the author of three novels: Escaping Barcelona, Finding Eivissa, and Eluding Reality; a short story collection, Coffee, Cigarettes, and Murderous Thoughts; and a poetry collection, The Silence Before Dawn. His most recent published project is a collection of Photostories in five volumes under the KSHM Project umbrella, for which he collaborated with Australian photographer Karl Strand, combining one of a kind images with short stories and vignettes. He is currently working on his next novel narrated in two opposing points of view. He lives with his family in the Northeast.

The Givi project is finally done. Life got in the way, so it took a bit longer than expected, but it is now done.

Scuff the cases, wash with a special SEM detergent to remove mold release. Wipe with SEM Plastic Prep, Prime with sandable filler primer, wipe again, the shoot with a color coat followed by a coat of red pearl, and then clear.

I also wired the Givi tail light to the brakes, so now it lights up when braking. 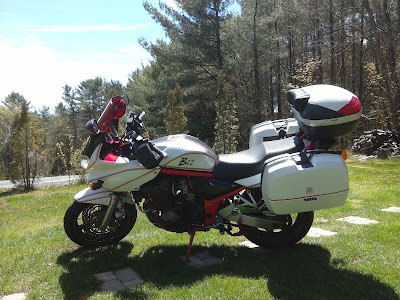 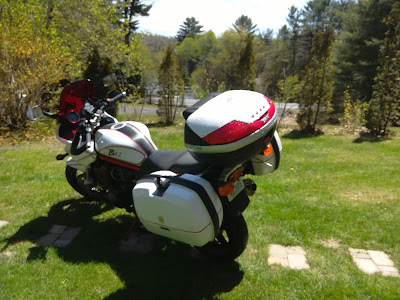 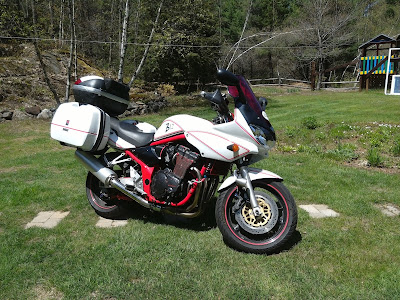 In the mean time, I installed a set of Motolights with LED bulbs to help with night time vision, plus changed stock headlight bulbs to the Sylvania SilverStar bulbs. The first night ride will tell how that works. 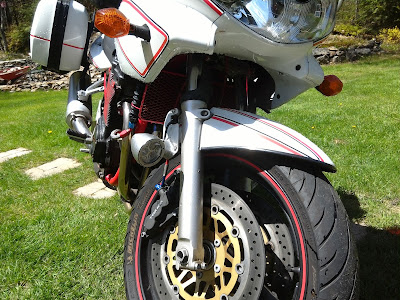 Posted by Henry Martin at 12:04 PM No comments:

Moving along with this project.

In part 3, I'm finally getting to the painting stage.

The cases were wetsanded with 220 grit paper and washed with Dawn dish detergent to remove some of the contaminants. Unfortunately, water was still beading up, so the surface was not ready to accept paint.

SEM came to the rescue with their Scuff and Clean product After washing the cases with this the first time, there was a noticeable improvement in wettability (yes, not a real word, but it means whether the surface can be wetted), with few spots still beading up. After the second wash, the cases remained nice and wet all over.

Next step was taping. I did not want the new paint to get damaged when putting the case on and off the racks, so I left the back contact area stock black plastic. The same applies to the hinges and the feet on which the cases stand when removed. There is no sense in doing a good paint job only to have it chip in the inevitable contact areas, which will then introduce a way for water to seep in and damage the paint. So, masking tape and a razor blade it was. I also taped the lip that interlocks when the cases are closed. 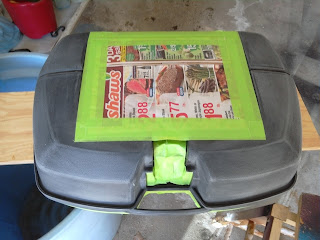 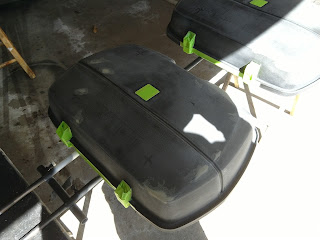 A note - wiping the Polypropylene gave it a nice static charge - and the cases became an instant magnet for any airborne dust, hair, et cetera. Blowing it off with a compressor did not do a thing, so I wiped it down again with a lint free tack cloth. 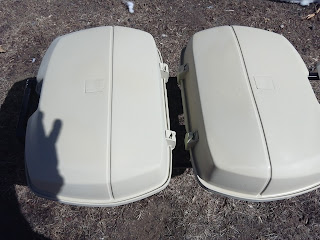 Will continue.
Posted by Henry Martin at 11:26 PM 1 comment:

Check out My Books

Escaping Barcelona (Mad Days of Me #1)

Finding Eivissa (Mad Days of Me #2)

Eluding Reality (Mad Days of Me #3)